One of the many questions users who switch from Windows to Linux have is how to compile C/C++ sources and what IDEs (Integrated Development Environment) Linux has to offer. Most of them study C or C++ at school or home and are usually used from Windows with an IDE like Dev-C++ or Code::Blocks.

In this article I'll give a few explanations on how to compile software for studying purposes on Linux (and particularly Ubuntu), what are the most common ways, what I consider to be the most effective method and which are the most popular applications to use for programming in those languages.

I'll divert a little to say that Dev-C++, although a wonderful IDE on Windows, is no longer maintained, and even though a port used to be around for Linux, it was abandoned too (as far as I know). Instead, for those who would like a replacement which works and behaves the same way, I can warmly recommend Code::Blocks, which has an actively maintained port and it's easy to compile and install. According to the details I could find on #ubuntu @ Freenode, Code::Blocks will also be included in the Intrepid Ibex (the next Ubuntu release) repositories, in universe.

Back to our topic. I think the simplest way to start with C/C++ in Ubuntu is to use first an editor like Nano and create a source file, then compile it using gcc (GNU Compiler Collection) in command line. But first, to install the GNU compiler and several other utilities for compiling sources, use:

build-essential is a meta package - a package which only depends on other packages, so installing it will automatically install several tools like gcc, g++ and make.

Next, create your source file using a text editor of choice (I used Nano for this example): 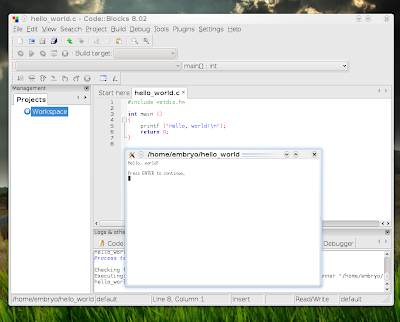 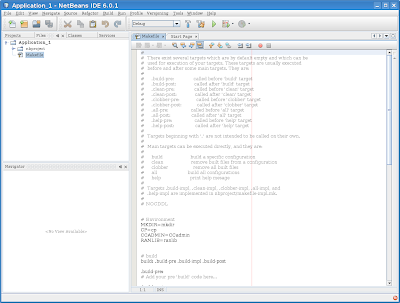 Addition: Eclipse CDT
The package eclipse-cdt provides the Eclipse IDE with C/C++ development plugins. I found it slower than the others IDEs mentioned here, especially the interface.
Homepage

Addition: CodeLite
CodeLite is an open-source IDE similar with Code::Blocks. To install it, download the latest Ubuntu build (DEB package) from the official website, make sure the current working directory is the one where you saved it, and type the following command (replacing the filename with the latest name):
Homepage 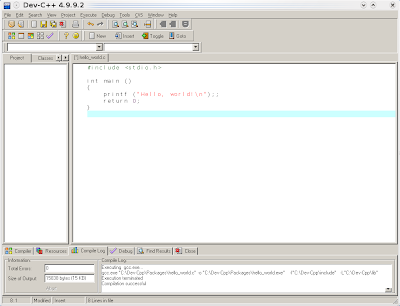 Have some other questions regarding compiling or using IDEs on Linux? Or maybe a correction or suggestion regarding this tutorial? Please feel free to discuss in the comments below.
Posted by Craciun Dan at 9/20/2008 02:19:00 pm

I think Eclipse deserves to be mentioned here.

Thanks for mentioning it, I completely forgot about Eclipse. I think I'll make an addition and include it too, since it really deserves mentioning and it's a complex application.

Just make sure you are using Sun's JVM.

I usually use eclipse for php/c++ related development

What i hate is that is an memory/cpu hog
but is very nice for coding php/jscript
http://mapopa.blogspot.com/2008/09/php-granymede-ganymede-packages-based.html
and i still have to figure out how to debug large c++ projects like firebird/flamerobin

Another thing on my to do : get egit working and to change the colors for code editor to make them more darker
like the vim in the console

I started with Eclipse since that is what I used on Windows. But later I found KDevelop which currently rocks my C/C++ programming world. KDevelop is right at the sweet spot for me. Quite a bit lighter and faster than Eclipse and has almost all the features. Currently I'm also starting to learn Emacs.

Yeah, I think netbeans deserves mentioning as well, it's easily one of the most advanced IDE's for almost every language. netbeans 6.5 beta makes eclipse look like a text editor.

I tried using Anjuta for some c++ coding but I was never able to get it to work correctly. I'm definitely going to try some of these other compilers out.

Yeah, I think netbeans deserves mentioning as well, it's easily one of the most advanced IDE's for almost every language. netbeans 6.5 beta makes eclipse look like a text editor.

I would like to point out that both Eclipse and Netbeans are both originally designed to create JAVA programs but are both very capable of doing C/C++ with the correct plugins. Netbeans does know it's C/C++ very well.

CodeLite C++ IDE for Ubuntu is the best I have used so far.

It's still in beta. 6.1 has everything necessary to have fun: Java, C++, Ruby. 6.5 will add PHP. To my taste, NetBeand does jRuby better than Eclipse.

However, after reading the post, my first thought was "Eclipse is missing". When I recall what Sun is doing, I get a sad feeling about Sun and NetBeans. Ther deserve better ...

I tried using the command to execute "myapp" as outlined in the article but it didn't work. I get the following response:
bash: ubuntu@ubuntu:~$: command not found

Does the "bash:" mean that I'm using the bourne shell?

Should I be using another shell?

I use to be C programmer using an SGI version of UNIX. Once I compiled a program I was able to execute it from a command line just by entering the name of the executable - is this possible with UBUNTU?

put a ./ in front of the command name.

Most likely your unix environment had . included in the path. You can see you path by typing:

This is the location where executables will be searched for, and in the order they are listed.

If a dot is included in the path this will search the current working directory as well. This is generally considered a bad thing, but on your own machine its not just a big deal...

Thanks - your suggestion worked.

It might interest some people to know that nano can also do syntax highlighting. If it's not enabled by default in your distro, just put a copy of the nanorc file (usually can be found in /etc/nanorc, or google it) into your home directory as .nanorc. You can edit that file (nano .nanorc) and customize nano's behaviour as you like it (set tab widths, enable syntax highlighting, et cetera.)

I installed Anjuta via Add/Remove. Then after checking in couple of add-ons I finally made the Build Option come to live.
But I simply couldnt make the drop down options to work, as they were disabled.
This is first time with linux, so would appreciate any help.

Hi, you do not need to compile Codeblocks in Hardy, it is already a repository for it

Then add this lines:

KDevelop is just for KDE.

Anjuta is so incomplete.

Code::Blocks also accepts you to use any compiler (this is also in Windows) which means that you can just set to use Intel C++ compiler, or tne standard GCC.

hi..thank you so much ...
for a 3-4 days i've been searching for an article like this...(i am new to linux dont know about it much)...
but this has helped me understand...
i am going to try code::blocks and ill surely comment on its use to a beginner like me>>>
thanks once again

You're welcome Neelesh :-) Hope Linux will work OK for you.

I have tried numerous IDEs in linux, but I think I have finally settled on CodeLite. Code::Clocks is pretty good, but CodeLite just seems a lot more polished.

Thank you all for sharing these too. I updated the post accordingly.

Your instructions for building codeblocks on Ubuntu 8.04 fails when I try to run codeblocks: error while loading shared libraries: libcodeblocks.so.0: cannot open shared object file: No such file or directory

The link libcodeblocks.so.0 exists in /usr/local/lib so either its wrong or a ldconfg step got left out somewhere.

Are you sure you did everything right? Did you run sudo ldconfig after the installation? I can't think of anything now... it worked for me.

That was my point.

sudo ldconfig was left off your instructions for building codeblocks.

It gives the error message I reported when you follow your recipe.

sudo ldconfig is the final step which you left out of your instructions.

Actually, IMHO it should be in the make install part of the makefile which is already being run by root.

OK, I included it in the article now. Thanks :)

I recall finding a port of Dev C++ to Linux on FreshMeat.

now we have another option in jaunty qtcreator with qt 4.5

Thanks for the blog post.
Good read. I'm just migrating over to Linux (Ubuntu) from a long time of developing on Windows under Visual Studio 6.0 up to VS 2008.
The review of the various IDE's was a lot of help.

You also forgot the KDevelop and/or QtDevelop and for persons that don't hate Mono, Monodevelop. All are integrated IDEs that do most work to you.

thank you so much ,you solved my problems
thanks.

thank dear tuxarena i was at a stage of losg my lap,, as i always used c and c++ in windows,, but my lap hav ubuntu..u helpd me to use c and c++ in my ubuntu.......thanks againn

Ubuntu supports almost all of the IDE supported by most of the unix and linux systems such as Qt Sreator, Code::Blocks, Eclipde, MonoDevelop,Anjuta, Gambas, NetBeans and many more...IDE Ubuntu Ubuntu Development Environment

hey i m on the idconfig part and when i press enter after writing "sudo ldconfig"...it says nothing...!!!
now when i run codeblocks...its not able to comppile c++ programs....cant identify "conio.h"...!!!
Help me out of this !!!

Netbeans, the best IDE i have ever seen for compiling and running c/c++.. :) C Tutorial For Beginners