Krita - The KDE Answer to GIMP

I was recently browsing through various Linux news sites and bumped into this article, a taste of a comic done in Krita, the KDE painting and image editor application, which is part of the KOffice suite. Now I rarely use image editors, and I'm totally untalented at it, but when I do, I use GIMP for basic cropping, coloring or other simple stuff. Anyway, I remembered I only tried Krita once, in KDE 3, and I was a little dissatisfied with it (can't remember exactly why), so at the time I decided to stay with GIMP. This is why this article brought Krita again in my attention, so I decided to give it a spin and see how it looks like. 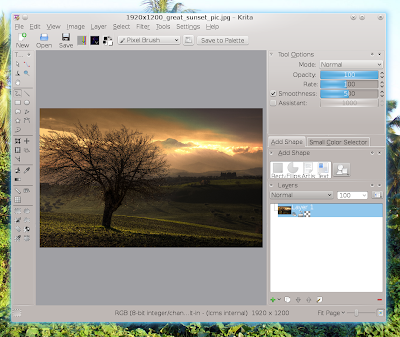 In this overview I'm going to talk about Krita 2.2.2, which comes included in the Ubuntu 10.10 Beta repositories. Being a full-fledged image editor, Krita comes with many tools and features needed by an image manipulation program, and to list a few.
- support for various file formats, including PNG, JPEG, BMP, PDF or TIFF
- selection and painting tools which include various shapes like line, rectangle, ellipse, in addition to freehand paint
- many brush engines
- filters: raindrops, blur, sharpen, mosaic, to list a few

In addition to these, Krita allows you to change brightness/contrast, rescale, crop and rotate images, export the result to various image formats or PDF, take advantage of the split-window option, or work with layers. 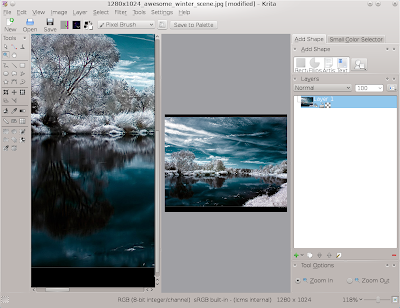 When starting Krita for the first time, it will ask you to choose the size and color model for the default template (just like probably 90% of the KDE applications, I had to resize the window and widgets inside it in order to get a good screenshot, but this is off topic).

I mentioned some of the good parts of Krita. Now, I don't know if this is only me, but when applying an effect I got a preview on the image, but after closing the window the image wasn't modified. I tried the Apply and Close button too, but same result. After this, Krita crashed. This happened without exception many times.

Final thoughts: Krita is nice, but it currently crashes a lot. It's frustrating to hit apply to an effect and then watch the program crash, and I think this needs a lot of working, because at the time being, it's in an almost unusable state. Other than that, Krita is a decent replacement to GIMP (or it will be, as soon as they get the crashes fixed), especially if you want an application to integrate well with your KDE desktop.
Posted by Craciun Dan at 9/26/2010 02:21:00 pm

Yes, Krita 2.2 was definitely not user-ready yet. We explicitly mentioned that in the release notes. Krita 2.3 will be much more stable and much faster.

However, as the maintainer of Krita and member of the development team I really want to emphasize that Krita is not meant to compete with Gimp as a general-purpose image editor. Krita is for painting digital art from scratch, not for manipulating photos.

It would be wonderful, though, if you could manage to follow the beta's of 2.3 we are releasing and to report any crashes you have to bugs.kde.org. There's a handy wizard and every bug report is welcome and very valuable to us.

The problem for developers is that we generally only use the application for two or three minutes to check the result of our coding and then go back to the editor, so we really need user feedback!

Thanks a lot for your input Boudewijn Rempt! It's great to see an actual developer comments on this. Well, I will surely do that, and possibly make a through review of Krita 2.3 when it will be out (and also on a stable distribution, since the one I ran it on was Kubuntu 10.10 Beta, which at the moment is far from being stable in my opinion). Again, thanks for the clarification and good luck with the development of this application.

I can't read your article as it shows up black on black. Firefox 3.6.10 on XP

Also, as a general rule, whenever you're trying to run KDE applications, avoid using anything related to Ubuntu. Not trying to start yet another flame war but there is something about (K)Ubuntu that just doesn't sit well with KDE for some reason and the fact that KDE is treated like a second-rate citizen on Ubuntu should not surprise anyone at this point in time.

Kubuntu or Ubuntu with kde-desktop always display inconsistent behavior regarding KDE that cannot be seen anywhere else.

Try using a KDE-friendly distro or a more desktop neutral/agnostic distro when testing KDE applications; the results might surprise you!

Krita appears even more unready to create documents from scratch. When I opened it I was unable to determine how to start a document. I did successfully open an already extant svg document (that I'd made in InkScape), but that's a different starting point.

I'll admit that it looked interesting, but not extremely so, and not enough that I was willing to bother copying a document that I'd made elsewhere. It did look more like a bit-map editor than a drawing application (which is contrary to the assertion that I was checking).

What I, personally, am looking for is a good replacement for Deneba Canvas, an application that I used on the Mac and on MSWind around a decade ago. It's primary characteristic was that it was BOTH a bit-map editor and a vector graphics editor. (The bit-maps were kept in [optionally transparent] "canvas"es within the larger drawing, and drawings could be pasted into them (with automatic conversion to bit maps).

It's fine to have an opening dialog in which one selects the drawing area and mode, but one should then get a visible canvas to draw on. Krita currently fails on this step...though if you get past it by opening a document that already exists it appears to be a decent bit-map editor. (It's even better if one can expand the drawing surface as needed.

It appears to me that Krita is aimed primarily at screen art rather than as printed works. This is reasonable, but it does mean that I wouldn't find it useful. (OTOH, the inclusion of CYMK color mappings hints at a printout target. So I'm not certain.)

When you start Krita, you select "Custom document" on the left side. Then you can input the size of your canvas and click on the "create" button. That's it.

If you still have problems you can ask in the Krita forum. http://forum.kde.org/viewforum.php?f=136

Canvas size can be change. It's in then menu under Image->size canvas...