Over time K3b got its reputation as one of the most powerful burning applications not only for KDE, but for Linux in general. Development at the KDE4 release evolved rapidly in the last couple of months and the first usable alpha of the KDE4 port was put up for testing a few days ago, on April 22. Earlier today I made a brief review of this release, which you can read here (nothing is new, K3b 1.65.0 comes with the same features of 1.0.5, the only major difference is that it was ported to use the KDE4 libraries).

This short guide will list several easy steps you need to follow in order to compile and install K3b from source in Ubuntu/Kubuntu 9.04 Jaunty.

Notice that since this is an alpha release, it is not recommended for production work.

Here are the mandatory (and several optional) dependencies which you need to install before building K3b:

The following is just one line of code:

These should be (almost all). Anyway, they should be enough to compile K3b.

The next step is to go on the official website and download the source (direct link). Then, make sure the current working directory is the one where you saved it and uncompress it:

Change the working directory to k3b-1.65.0, then compile and install it:

The -DK3B_BUILD_K3BSETUP=OFF switch will get rid of the Polkit-Qt error (great thanks for a comment in this thread on the Fedora Community forums).

That's it! K3b should be now properly installed. Here's a screenshot: 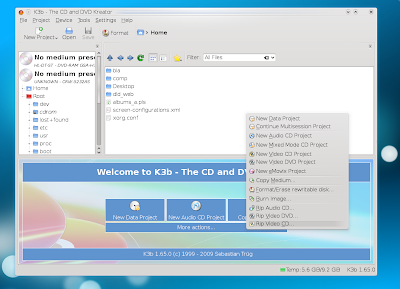