Here are 5 of the most popular, standalone feed reader applications for Linux. I didn't include feed readers which come with applications like Firefox, Opera or Thunderbird for example, but these can also be considered a viable alternative to the ones below. 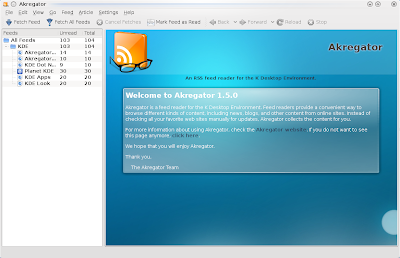 Importing OPML or XML feeds also works in Akregator, and feeds can be marked as important.

Akregator offers three view modes too: normal, widescreen and combined views. For KDE users, Akregator should be one of the best choices. 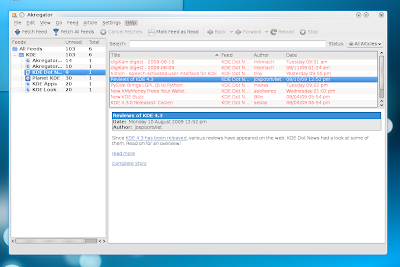 Liferea
Liferea (Linux Feed Reader) is one of the most popular feed readers for the GNOME desktop environment. It has a usual interface for an RSS reader, reminding of Akregator from KDE, with the feeds list to the left and the news and the internal browser occupying most of the rest of the main window. Liferea allows you to manage feeds, open links in a selected external browser, configure the font size, change the number of feeds to display, integrate it in the system tray, change the default download manager. 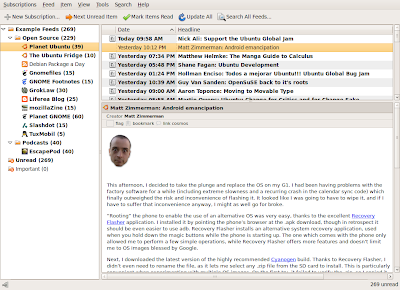 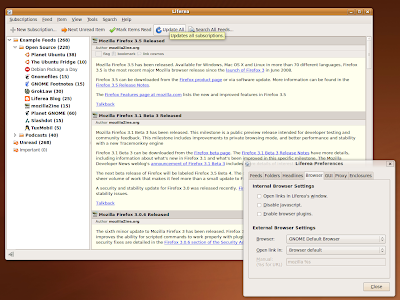 Offering support for both RSS and Atom feeds, Liferea is definitely one of the best choices out there for GNOME users.

Blam
Blam is yet another GTK feed reader but it is intended for those who need minimum features and it provides a minimal, clean and simple to use interface. The only drawbacks I could catch was that (at least in the version I tested - 1.8.6), fetched feeds are not remembered at the restart of the application and the system tray does not provide a context menu for quitting the application. For those who are looking for something minimal and basic, Blam should be a good choice, especially if you are a GNOME user. 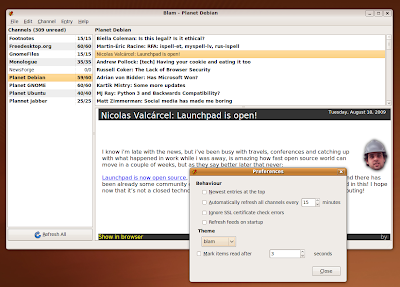 News Plasma Widget
This is an awesome, tiny news widget for Plasma, which comes by default with KDE4. It supports adding more than one feed, show timestamps, configure the update interval. This is great if you want your favourite news directly on your desktop, without the need of using a separate application. 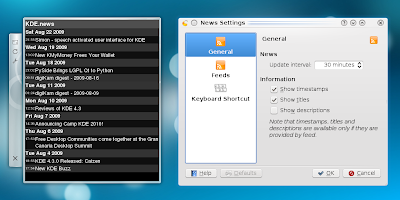 Straw
I'd describe Straw as in-between Blam and Liferea. It has enough features to make up a good RSS reader to please any normal user. It uses GTK, it is easy-to-use and it has a clean interface, offering support for both RSS and Atom feeds. Straw provides a system for managing and sorting feeds, time-based refreshes, and importing of OPML feed files.

As a conclusion, try them all and see which one fits. For a pretentious KDE user, I'd go with Akregator, but if you need only basic functionality and direct access from your desktop, try the News Plasma widget. In GNOME, Liferea is the most complex and feature-rich, while Straw offers enough functionality for a more lightweight application and Blam is very minimalist.

what about RSSOwl?
the best RSS reader for linux imho
http://rssowl.org/

I omitted this one (never used it). It looks very good though in the screenshot you provided. Thanks for sharing, and maybe I'll review this one separately in one of my future posts!

I have to make a voice for RSSOwl, as well.

Akregator is cool but too KDE-centric. Liferea is slow as hell if you have more than 50 feeds (you can't read while it updates feeds).

Blam have potential, but is too basic for feed addicts.

I've tried them all (except plasma thingy), and RSSOwl beats them on every single point.

There are a few others listed at

And yea! What about the text/ncurses based rss readers?

It only took me 6-12 mos to find them, thanks to the above link.

(Google Reader would be great if it wouldn't stall all the time.)

I'm surprised thunderbird isn't in here... especially since a lot of people use it as an email client already.

Raggle. can be used where ncurses is.

Very useful, thanks for this post, a nice way to be in touch with my fav blogs :D