Being actively developed, feature-rich, providing access to several useful Internet services and with a pretty decent media library, Banshee has a pretty fair share of users, and it is definitely a powerful music player not to be ignored. 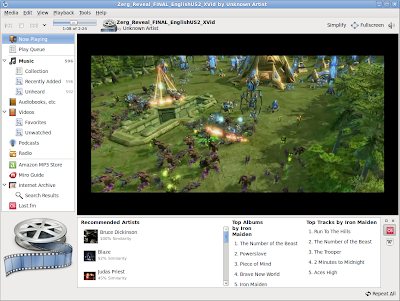 Although Banshee includes support for both audio and video files, and comes with a video library too, its well-known and popular for its music playing capabilities rather than video playback.

Banshee improved a lot since the last time I reviewed it, which was over an year ago, back when the version was 1.6 beta. For those who never tried it, here are the main features:

- music library
- support for podcasts
- Internet radio support
- smart playlists
- integrated access to Amazon MP3 store
- Last.fm song submission and Last.fm radio (since the Last.fm radio service became paid a while ago, you will need to have a subscriber account for the radio to work)
- fast access to Miro guide, a website which allows to search and download videos
- cover fetching from the Internet
- system tray support, with a nice mouse-over info report and the ability to control Banshee by right-clicking the tray icon (this includes rating the currently playing song, play next or previous, pause, repeat or shuffle)
- built using GTK2, so it blends well into the GNOME browser

Just a mention about the Amazon MP3 store: it looks like by default either the geo IP detection is not working properly or Germany is selected. To change this, go to Edit->Preferences, click the Source Specific tab in the window that appears, select the Amazon MP3 Store entry in the Source list box, and then select the desired country:

Banshee allows the user to configure several aspects, like gapless playback (to get rid of the short gap on track change), collection organization, services, and enable/disable various extensions. Which are actually quite impressing: Banshee includes Wikipedia extension, Audio CD extension, Internet radio, Podcasts, iPod support, Last.fm, Mini Mode and Notification, these to only list a few. The Mini Mode is quite a delight actually, for those who need just a small window, so it doesn't take up to the whole desktop space:

Smart playlists, the 5-star rating system and the tag editor are another pluses for this great player.

Again, it seems to me that fetching local covers doesn't work properly (or maybe it is not a feature at all?) I tried to open a video file, play it, pause it after a while and then hit the play button ago. At this point instead of continuing the video Banshee started to play the song that was playing before opening the video. In my sole opinion (and this is not only Banshee-specific), having a single button for play/pause is not the best idea. I also bumped into a balloon message reading "Please move your music to /home/embryo/Music" and changing the music directory in the preferences didn't make it go away. I think this is a little inappropriate, since I like my music where it is (and that is not /home/embryo/Music). This has also been reported as a bug on for Maverick here.

Other than that: I found Banshee's usability far greater than some other audio players. Believe me or not, over 50% of the music players for Linux that I tested didn't have a keyboard shortcut to focus the track search field. Banshee uses Alt+S for this. 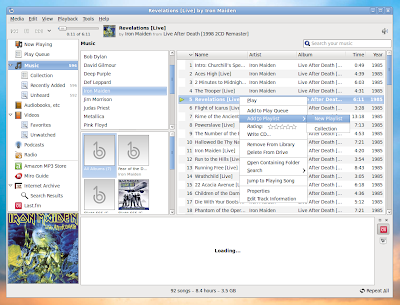 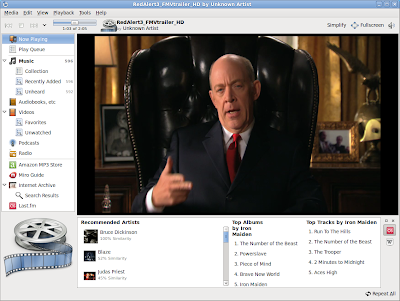 To conclude, Banshee's state is currently as it has always been in the past two years or so: a very good player, pretty stable now, with a lot of features, which can be a the perfect replacement for other GNOME collection-oriented players, like Rhythmbox.
Posted by Craciun Dan at 9/18/2010 09:12:00 pm