Rhythmbox is the default audio player coming with the GNOME desktop environment, featuring a clean, typical interface which is so common for GTK audio players. I could say that Rhythmbox has little missing features and it is rather complete.

The interface is divided between the playlist, which by default takes most of the window space, an artists widget, an albums widget and a left side bar with access to podcasts, library, podcasts, services which also displays cover art for the currently playing album. 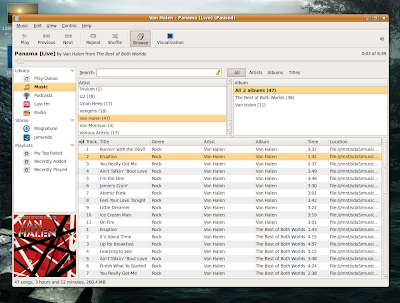 The playlist allows columns like artist, album, quality, location, play count and it can also be sorted. You can customise which columns to be shown and which not in the Edit -> Preferences window, General tab. You can shuffle or repeat the playlist too.

The side bar includes tabs for a complete customisable queue which you can also save to a file, music library, podcasts, Last.fm integration, radio and playlists. Aside from those, Rhythmbox also offers access at two music stores which are integrated inside it: Magnatune and Jamendo. Those two are renowned websites which feature artists composing music using a free, permissive license.

The Magnatune integration allows you to purchase an album from them using Rhythmbox and setting the desired amount of money you wish to pay, it will retrieve an entire playlist from Magnatune and allow you to play it, and present you with artist information and albums. Jamendo integration is also very good, and it will allow donations to the artist and downloading a torrent file of the currently playing album, which you can download afterwards using a BitTorrent client, like Transmission or Deluge.

Some other features Rhythmbox comes with are:
- Last.fm integration, which allows you to play Last.fm radio (like personal or neighbour radio), submit the tracks you are playing, rate, ban or love songs;
- support for podcasts, which I guess should be a must for any audio player
- small display, toggled with Ctrl+D, will switch between the usual Rhythmbox interface and a minimal, simplistic interface
- party mode, F11, which will put Rhythmbox in fullscreen mode
- visualizations
- support for various plugins
- it searches for cover on the local disk in the currently playing album's directory
- tag editor
- documentation

To mention some of the plugins which come bundled with Rhythmbox by default:
- cover art, fetches album covers from the Internet
- Last.fm integration
- minimize to tray
- iPod support
- song lyrics

The preferences window allows you to customise which columns will be shown by the playlist, the music collection directory, crossfading, and podcasts download location. 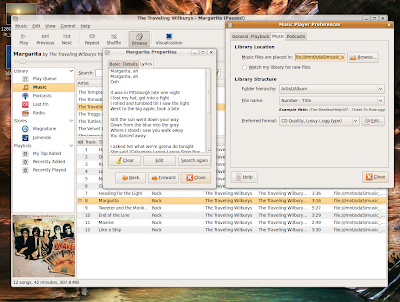 Rhythmbox also has its downsides. There is no equalizer yet and it can stop responding for short amounts of time (unfortunately this is not specific to Rhythmbox only, I've seen such behaviour in Exaile too for example). However, there is a plugin for an equalizer which you can find here, but I didn't try it so I can't pronounce on how it works. That being said, I think it is a great GNOME player and although it probably won't fit an audiophile who wants every feature available, it is definitely a good choice for the rest.

I like Rhythmbox, its fast and clean like you mentioned. The only thing that irked me was that for album art to be properly displayed the jpg or png had to be in the folder of the music file. Maybe I was missing something but it posed a big problem for my 20,000 + collection.

I did get around that by batch exporting all embedded album art using mp3tag through wine. Did the trick.

Thanks for the article, well written.

Ditto. I prefer Rhythmbox too!

If you import/rip audio CD, in Rhythmbox you cannot set up quality like for example VBR 256kbps. You have only deault 128kpps. Also you cannot rip individual tracks from CD, only all tracks :(

UI of Bashee is much nicer, cleaner with album art pics and more and more..

IMO Rhythmox is too outdated in many ways..

Rhythmbox also has a plugin for music recommendations. You can find more plugins at rhythmbox homepage.

nice info sharing. Thank's a lot for informatif posting. I have been waiting for review UBUNTU 9.10 ^_^