Quod Libet is a GTK music player written in Python with support for various audio formats, including Ogg Vorbis, FLAC, MP3, WAV, MP4 and WMA. Quod Libet has a different interface and a slightly different approach compared to players like Rhythmbox or Banshee, for example.

The version I will review in this article is Quod Libet 2.0 running in Ubuntu 9.04. Quod Libet features a simple interface where the playlist occupies almost all the space available. Scanning large collections of music (>5000 songs) can take a while. After this Quod Libet can be a little confusing, since the default view mode is Search playlist, and the songs will not be listed there. You can switch the mode in the View menu, and select Playlists or Album Lists or whatever. To use the search field, after adding a music folder you will have to place a pattern in the Search field in order for the tracks to appear. For example, after adding a directory with songs, you can fill in a filter like #(playcount >= 0), which will show all songs who have never been played or have been played more than 0 times (that's all songs). Default filters include listing of songs not played today, in a week or month, top 40 or bottom 40 songs (taking play counts). You can also edit and save your own filters and load them automatically. This is just like smart playlists in Amarok if you like. The only problem I encountered with the search field is that for large music collections it takes too long to filter them and can make Quod Libet freeze for a while. The true power of Quod Libet lies within its available view modes, which allow Quod Libet to look even like Rhythmbox if you like. It comes with no fewer than nine view modes, which includes:
- a search library
- a playlists mode
- an albums list mode
- paned browser mode, which resembles the look of Rhythmbox
- internet radio
- podcasts 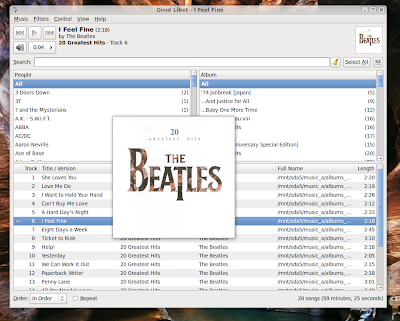 I liked that Quod Libet will fetch cover art from the local album's directory. 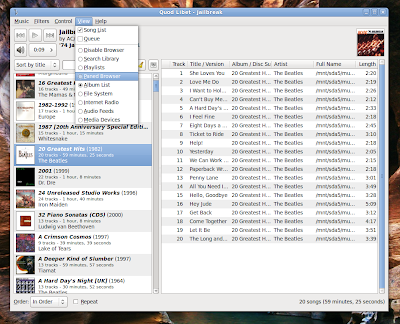 Right-clicking on any of the columns will result in an error message, but it won't crash the application. The available columns can be selected in the Music -> Preferences window, Song List tab, and they include track, title, album, filename (with or without full path). 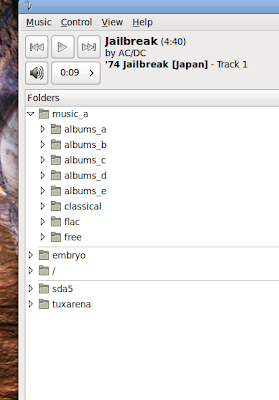 Quod Libet comes with lots of plugins, which includes the Last.fm song submission plugin (called AudioScrobbler Submission). The nice thing about this plugin is that it also allows to skip and don't send songs which match a pattern. Some of the many plugins it features would be:
- alarm clock
- automatic rating of songs
- CDDB lookup
- download album art from various websites, including Amazon.com
- export playlist to HTML
- tray icon

Quod Libet has some problems with an error report that keeps appearing, but it doesn't crash the application itself. Otherwise, it's really a nice player, with a completely different approach. Its interface, although it seems minimalistic at first, can be changed using one of the view modes available, turning it into a different player with a different behaviour.

no. he means rythmbox

does it have a queue mode or somthing like that???, i want to try it, but i cant live without "play queue"...

there is a play queue

Actually most errors can be easily fixed. Just look at http://code.google.com/p/quodlibet/issues

A nice feature of Quod Libet is that it loads embedded ID3v2 cover art (APIC), and it is supposed to support user-defined ID3v2 tags.

Quodlibet is great! However: I bet it will become a much more popular player when those "bugs that can be easily fixed" are already fixed before the program is installed.

For instance proper dependency handling. Why are DEPENDENT packages not installed before Quodlibet is? It's the only program I experienced that has this behaviour. Any clue?