Banshee is one of the popular audio players for GNOME, and maybe the first alternative to Rhythmbox, the default player coming with this desktop environment. Banshee has made some amazing things in the last year, especially since 1.0 came out. Each new release brings something new, it gets more stable and new features are added. 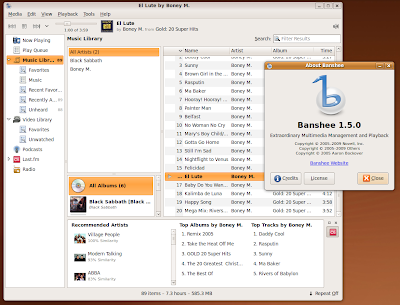 Although this is not tagged as a stable release, I decided to take a look at it and see what is new since the 1.4 series. This beta comes with various new features, many bug fixes and improvements. To mention just a few:

One of the new features in 1.6 is the ability to match several characters to their ASCII equivalent when searching in the playlist. For example, o will also match ö and vice versa. I think this is a great new feature, because it makes it easier to search and play tracks which have non-English characters in their names.

Banshee can now import the library from Rhythmbox, so if you want to made the transition from this player to Banshee, you don't have to worry for losing your library. The score column is now automatically updated after playing a song too.

Banshee has the same clean interface, typical to so many GTK audio players. Everything looks in place, everything is easy to find and intuitive to use. To the left there is the side panel, while the music library and the playlist takes most of the center area. The Last.fm panel is located at the bottom of the main window. Here's how a usual instance of Banshee looks like: 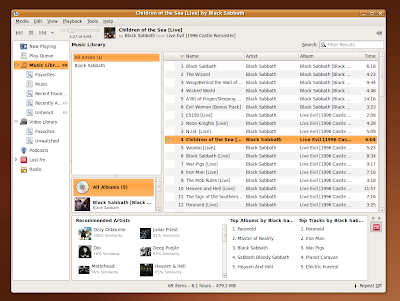 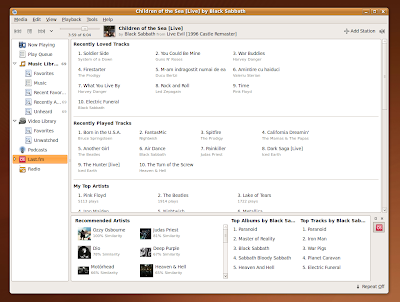 To conclude, I was positively impressed by this Banshee release. And it's only a beta currently, so the final release should be even more impressing! Great work, and a great, powerful audio player which really deserves not to be missing from a top audio players on Linux list.
Banshee homepage

I'd like to mention here that Banshee is a C# / Mono application, and therefore we should discourage new users from using it or coming to depend on it. Please se RMS' blog-post on this topic:
http://www.fsf.org/news/dont-depend-on-mono

@Earthling:
If we were to do everything RMS says, we should also use neither Ubuntu nor even Debian, which despite the latters extremely strict freedom guidelines, apparently strike Mr. Stallman as insufficiently free. RMS has some slightly odd conceptions about freedom, and, to be honest, is a bit paranoid.

On mono specifically, if Canonical's lawyers think its OK (https://lists.ubuntu.com/archives/ubuntu-devel-announce/2009-June/000584.html), I'd go with them over Stallman.

On Banshee: I tried it (1.4), but my library is big enough that the search-as-you-type made the interface slow to respond for a second or so when you typed something in, which I found annoying. I'm currently using MPD with the GMPC client, which handles it much better.

The risk/reward analysis on Mono clearly indicates that Fedora's choice to remove it from the live CD / default install is the right one.
The main thrust behind Mono at Canonical is an ex-Microsoftie, look at his LinkedIn profile:
http://www.linkedin.com/in/rickspencer3
In somewhat related news, Fedora, a distro that respects my choice not to have Mono preinstalled, is overtaking Ubuntu on distrowatch (for last 30 and last 7 days).

> The risk/reward analysis on Mono clearly indicates that Fedora's choice to remove it from the live CD / default install is the right one.

Fedora didn't remove mono from the liveCD due to a "risk/reward analysis", they removed it, quoting from their release notes, "due to lack of space". Mono is still available in the default repositories.

To imply that everything excluded from the desktop liveCD (which, at 650MB, can only hold a very, very small fraction of the software in the repositories) is excluded out of risk is *such* blatant nonsense that I suspect you're trolling.

(In case you're not: For your edification, Fedora packages with legal problems, such as libdvdcss, are excluded from the main repositories altogether; they're typically found in third party repos such as Livna).

I would LOVE to see a review of Jajuk 1.8

Why isn't this player more popular???>