A few days ago I reviewed Deluge, a powerful BitTorrent client for GNOME, so today I will continue in the same manner with the latest release of its KDE counterpart, the popular KTorrent.

Available for both KDE3 and KDE4, KTorrent is a fully-featured, complete and powerful client for the BitTorrent protocol. The latest version, 3.2.1, was released earlier this month and includes a lot of bug fixes and web seeding improvements. 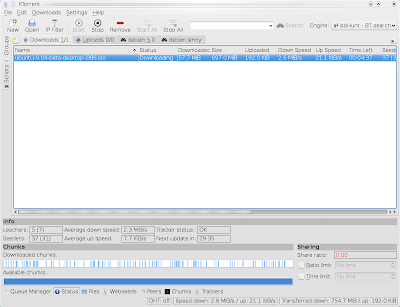 KTorrent has been always the most popular client at least on KDE, including all the configuration options needed and a reasonable number of useful plugins to extend its functionality up to a full-blown BitTorrent client.

One of the most useful plugins is the ability to search on various torrent sites directly from within the application, without the need of an external web browser.

You can also easily add custom torrent sites if you're not satisfied with the default ones. Each search result is opened in a new tab inside KTorrent. Among the other plugins included are the DownloadOrder plugin (which allows to specify the order in which files belonging to the same torrent are downloaded), InfoWidget plugin (which will display useful information about a torrent in separate tabs), or the Syndication plugin, which supports both RSS and Atom feeds. These are not all though, you can enable or disable plugins via the Settings -> Configure KTorrent -> Plugins menu. 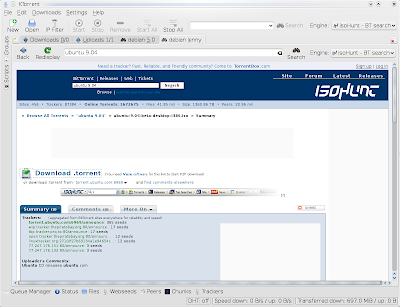 KTorrent will allow to download only certain files from a torrent, set bandwidth limits, it has system tray integration, it provides notifications, customisable keyboard shortcuts just like any respectable KDE application, and it also includes a configurable queue manager.

Just like Deluge, it offers a pretty easy-to-use interface and will display by default information about the torrents which are downloaded at the bottom, in several tabs. It shows the status, the torrent files, peers, chunks and even trackers.

You can also create new torrents and eventually share using trackers which don't require registration, like http://open.tracker.thepiratebay.org/announce or http://denis.stalker.h3q.com:6969/announce. 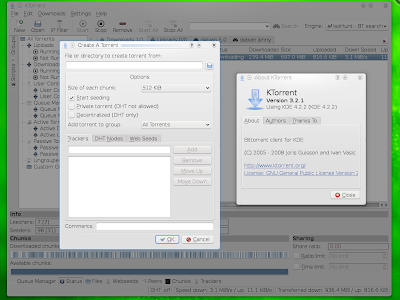 As a conclusion, I find KTorrent to be one of the most powerful clients for the BitTorrent protocol available for Linux, and definitely the best for KDE users. It gets new features and improvements with every release and it also supports trackerless torrents.

It would be good to make clear that the application is not at all KDE bound; you can run it just fine on all other platforms and it will look native due to there being themes for Mac/Windows and naturally GTK. (there is QtGtk for some time, shipped by default in Qt4.5)

So with that in mind you may find its the best for more users than just KDE users.

For linux, rtorrent is the best there is. Turn on encryption, feed it settings to upload 2x the download size (if you like being fair), make it watch a directory for new torrents, leave an instance in a detached screen and forget about it for a year. You just feed torrent files in one directory, receive bacon in another.

I only use Bittorrent client to my favorite website is http://www.sumotorrent.com, it’s fast and reliable, established since 2007 and still growing.