Shutter is probably the most powerful screenshot application for Linux, and the main reason for this is that it comes with tons of configuration options for the final process of taking a simple screenshot. And why not, considering there are people out there who need to take a screenshot of a single window or a desktop region instead of fullscreen only, like the GNOME default screenshot program. Of course, there is KSnapshot which offers these two options too, but that's where similarities stop. 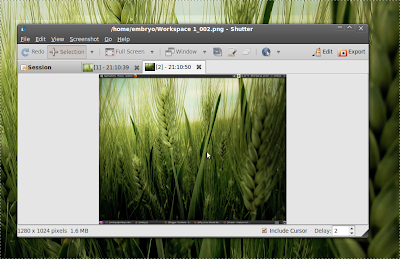 Shutter has much more to offer than the usual screenshot program. It allows you to take the screenshot of the fullscreen, selection (press Enter after selecting the rectangular area to take the screenshot), window, menu, tooltip, and it also provides a changeable delay from when you give the command until the actual screenshot is taken. You can print the image on-the-fly directly from shutter, without the need to open an external image viewer.

Shutter even comes with a basic image editor, and allows you to run effects plugins via the Screenshot->Run a plugin... menu entry. To open the editor go to Screenshot->Edit. Here you can use rudimentary paint tools like drawing lines or shapes, but you can also export the result to any popular image format and even to a SVG or PDF file. 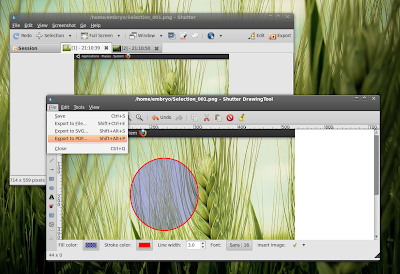 At first I thought Shutter cannot take a screenshot of itself, because it hides itself automatically to clear the screen, but there is an option in the Preferences to disable this behaviour.

Speaking of preferences, this is Shutter's real strong point. It comes with probably every configuration option imaginable. To list some of them:
- can save screenshots as PNG, JPG or BMP
- it allows to configure the default name for screenshots, arranging them by default as $name_%NNN (where NNN is 001, 002 and so on)
- include or exclude the mouse cursor
- zoom into the selected region
- include or exclude window decorations
- show or hide the main window after taking a screenshot
- integrate in the system tray
- pop-up notifications
- bind keys in GNOME

Currently, Ubuntu 10.10 Beta comes with Shutter 0.86.3 but you can install the latest release from here. To install the version which ships in the repositories, type in a terminal sudo apt-get install shutter or use the Applications->Ubuntu Software Center application for a graphical installation.
Posted by Craciun Dan at 9/13/2010 09:34:00 pm

Anyway, this one goes to my list of useful apps. Thanks a lot.

Thanks for that Fernando Basso :) Didn't cross my mind to check out the command-line arguments.

"gnome-screenshot does not only take screenshots from the entire screen. It can grab only one window, or it allows users to select (with the mouse) the area to be taken a screenshot of."

Although useful to some, for overwhelming majority of Gnome users features that can only be used from the command line don't exist. So it's fair to say that from regular user's point of view gnome-screenshot only takes screenshots from the entire screen.