His latest book is called Ubuntu Pocket Guide and Reference and it is available as a free PDF download from the official website, or as print edition from Amazon.com for USD 11,99.

The Ubuntu Pocket Guide quickly became one of the reference Ubuntu books due to its well-organised content and the availability of a downloadble PDF edition free of charge.

The book offers a concise overview of Ubuntu, starting with an introduction to basic concepts like the Linux kernel, general notions about Ubuntu and other Linux-based distributions.

The first chapter of the book covers all the details regarding the installation of Ubuntu: dual-booting with another OS, installing using a virtual computer software or even installing from within Windows using the Wubi installer. This chapter will also cover up the process of creating an installation CD.

The third chapter is an introduction to customising Ubuntu, and here are included ways of changing the general appearance, desktop layout, panels, themes, fonts, gdm (GNOME display manager), keyboard shortcuts, date and time and not only those.

Chapter four presents an introduction to basic Linux concepts, in a fashion which is accessible to beginners: basic filesystem handling, mounting, users. In this chapter we can also find an introduction to Nautilus, the default, easy-to-use file manager included by default in GNOME and implicitely in Ubuntu. 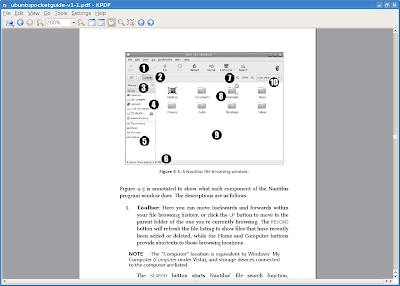 The fifth chapter, entitled Hands-on at the command-line is a little more technical chapter, but still suited to first-time Linux users. It covers up basic shell notions, starting up command-line sessions, commands form in Linux, relative and absolute paths, useful every-day commands, file permissions, command history and redirection. In my opinion, this is a must-read chapter for any Linux user who plans to be productive.

Chapter six focuses on software management, and here are explained notions about APT and DPKG, installing and removing software, and working with repositories.

The last chapter, Securing the system, covers up issues like the update manager, the use of a firewall frontend (Firestarter), and file and directory encryption.

As a conclusion, this book has it all: it is a great introduction to Ubuntu Linux, but in the same time it offers knowledgeable notions about Linux in general, accessible for any first-comer to the world of Linux.