I was lately impressed by Marble Desktop Globe, a free, open-source application for KDE4 which includes a 3D atlas of the world, with lots of features and an interface similar to the one of Google Earth. 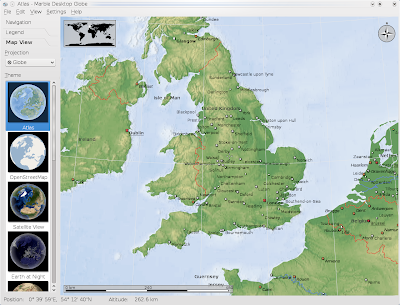 Marble is an easy to use geography application which comes included in the kdeedu package from KDE4.

Marble Desktop Globe supports zooming in/out and has a pretty good database of cities, including all the major cities from each country all over the globe. The map itself is physical and includes only the borders between countries, with no other administrative limits present or names of landforms. When you click any city on the map, the exact coordinates of that city will be given, and the Wikipedia information will be displayed. Another wonderful feature is that Marble lets you print the currently shown map to PDF, PostScript or a printer, and, moreover, you will be able to export the currently shown map to PNG or JPG too, for online publishing or future references. 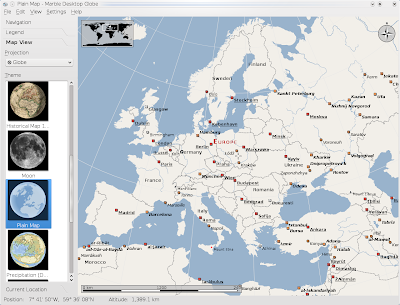 Although currently Marble doesn't use OpenGL, I found rendering to be pretty fast, considering that only the CPU is used. This constitutes an advantage for those who don't own a powerful graphics card. The data is located offline, with the possibility to retrieve maps from the Internet OpenStreetMap or access Wikipedia.

The Navigation panel will let you quickly focus a country, continent or water unit or to go to your Home location, or to zoom in and out the map. It includes a navigation panel, a legend and, one of the most important features, no fewer than 11 map views, including satellite view, administrative view and landforms view. However, I think that the historical map view is not exactly useful and more work should be put into it, maybe different views for different periods in time. 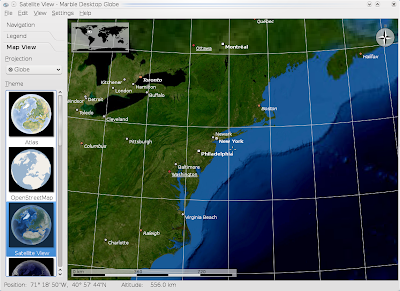 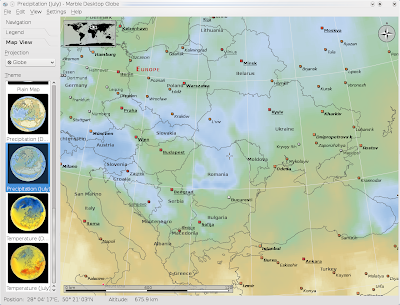 Marble also supports plug-ins, which can turn it into an even more useful tool for learning geography.

Once installed, it also offers a KDE4 desktop widget, called Blue Marble, which will show the Earth on your desktop randomly lighted and animated, creating a lively, more dynamic desktop experience.

I found Marble to be a pretty complex, powerful and useful application, which can be used not only for fun, but for learning geography interactively. I can say this application is one awesome piece of software, which eases learning geography and offers a good user experience. I just hope that in the future it will get more features, because I see a great potential for developing into a good alternative to Google Earth.
Posted by Craciun Dan at 4/06/2009 06:17:00 pm

I want see this application on gnome with GTK !

Catalin: Din pacate nu se poate. But if you don't want to install KDE4 there's also a version which has Qt 4.3 as the only dependency, see:

It's great post, really awesome, informative. I will try it with Italian Marbles, recommended to all, thx for new idea..