Konsole: This is a powerful and full-featured terminal included by default in KDE. It features desktop transparency, background images, profiles, tabs, notifications and plenty schemes to choose from. 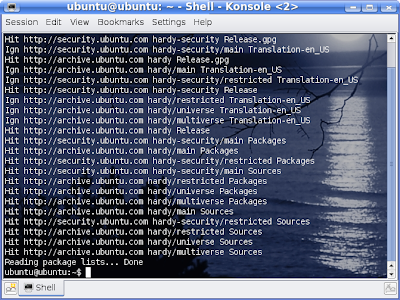 GNOME-Terminal: The GNOME terminal, it has support for tabs and desktop transparency, with a clean and simple interface.

Yakuake: A wonderful terminal application for KDE which has the big advantage to stay hidden unless called with F12. It has a style similar with the Quake 3 console or other FPS games. It can use Konsole's settings, including transparency effects and notifications. 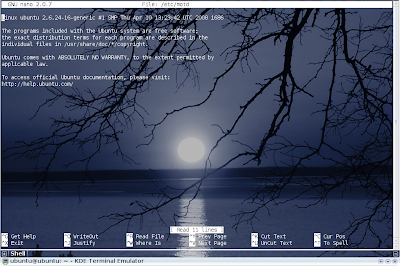 Tilda: Tilda is yet another terminal which has a style similar to Quake consoles. I could say it's the GNOME counterpart to Yakuake. When you first start it, you'll be presented with a window to configure it and choose the global shortcut for showing/hiding it.

ROXTerm: ROXTerm is a GTK terminal application with an interface similar to the one of GNOME-Terminal, supporting backgrounds, desktop transparency effects, profiles, colour schemes and many more. 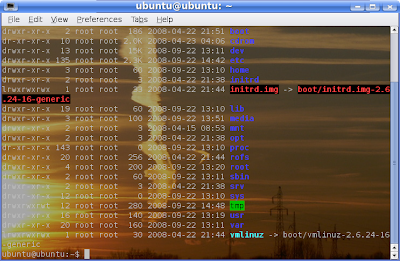 xterm: xterm is the tradition terminal emulator for the X Window System, with a minimal interface. It can be configured using its configuration file.

Eterm: Eterm is a terminal with a futuristic design similar with Enlightenment styles. You will have to run it as Eterm, with capitalised E. 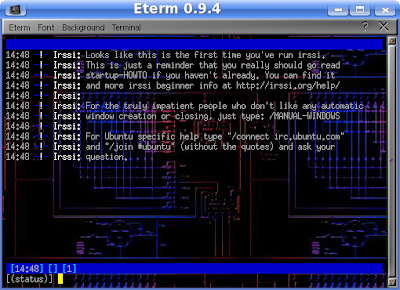 xvt: This is a basic terminal which uses a very small amount of memory, similar to xterm in many ways.

rxvt: It stands for our extended virtual terminal, and it's intended to be a smaller replacement to xterm.

mrxvt: Mrxvt supports tabs and background images while not being memory hungry and not depending on KDE or GNOME libraries.

rxvt-unicode: It features transparency effects, it has scrollbars and support for Unicode characters.

aterm: The AfterStep xvt terminal, aterm is based on xvt and needs less memory than xterm.

wterm: Another lightweight and simplistic terminal emulator which includes scrollbars, background images and transparency.
Posted by Craciun Dan at 9/22/2008 02:57:00 pm

I'd love to use something like Konsole, but due to font anti-aliasing, it is pretty much unusable to me in long coding runs. And thanks to the bogosity of FreeType2 you cannot even use the un-anti-aliased fonts...

And since I've never been "tabs" fan, I use several virtual desktops (normally 4) and put terminals on particular desktop depending on its purpose.

As a side note, due to that I often replace default window managers with IceWM. KDE which I like most has some flickering during desktop switching which after several hours becomes major annoyance. (IceWM is simply what I found first and made working for me with all my keyboard shortcuts within 5 minutes).

You forgot to mention guake which integrates nicely in the GNOME desktop. Unlike Tilda, which hasn't been updated in years, guake is a new development that already delivers the speed that Tilda doesn't have and has the promise of even better things to come.

It would be nice to see a more detailed comparison between various terminals by category.
All that I have seen differentiating the VTE-based terminals is the name (and possibly the memory footprint due to different toolkits used).

Personally I like rxvt-Unicode for light-weight, and Terminal (Gnome or xfce) for heavier-weight.

I like personally speaking. Terminus, which is a tiling gtk terminal emulator

Konsole 3.x can run without font AA this way

Konsole 4.x can change font AA properties on the fly.

Anyway I strongly suggest using Terminus font - as it is the best readable monospace font in the world.

The terminal emulator in Konqueror file manager is convenient and useful.

My project AKFAvatar can also be used like a fancy terminal.
And it is much more than that...

(The current release has problems with GNU screen, but that's already fixed in the CVS-version.)

Nice apps, but you forgot some like Sakura terminal, its lightweight, support for tabs, and very customizable

@Ihar Filipau:
What are you talking about?
I use konsole daily with Lucida typewriter, no AA.

Sakura and TermIT are also very nice. Yeahconsole is a good alternative to Tilda and its ilk; I prefer it.

BTW, mrxvt features much, much more than you've said. For example, the usual fake transparency (I assume that's what you meant by desktop transparency) AND the real deal, so to speak. It's also one of those things that you could configure all day long. Too bad about Unicode, though.